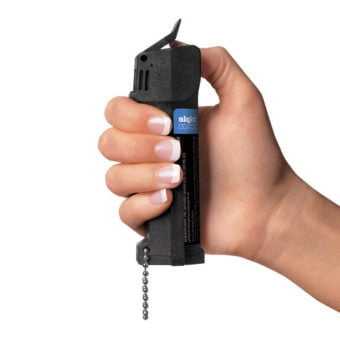 MACE® and Pepper Sprays are chemical aerosols used widely in law enforcement and as personal defense products.  They are easy to use and effective at temporarily stopping a criminal or animal by causing severe pain or temporary blindness.  MACE® and pepper sprays are designed to be aimed and sprayed at the face and eyes of an attacker.

Originally, MACE® was a completely different product than pepper spray.   True mace is a tear gas and solvent mix produced in the form of an aerosol spray.  The effects of mace on an individual vary depending on the subject.  Common effects of mace sprays on victims include a severe burning sensation on the skin;  when taken in the eyes, mace forces individuals to close their eyes, as pain is intense if they are open.  Inhaled mace gives the feeling of suffocation.  The intention when spraying mace as a self defense product is to temporarily distract and disable a criminal so a crime victim has time to flee and get help.  The intention when used by law enforcement personnel is to disable the offender long enough to overpower and subdue them.  The effects of mace generally last for between thirty minutes and two hours.

MACE® is illegal in many countries around the world, as well as some states of the U.S.  What is commonly known as mace today may in fact be a mixture of mace and pepper spray, or simply pepper spray sold under the popular name for its ready recognition by consumers.

Pepper Spray, sometimes called OC spray, is a chemical aerosol spray that is similar in function and effect to mace.  The technical name for pepper spray is Oleoresin Capsicum.  The active ingredient in pepper spray is capsaicin, a chemical plant derivative of plants in the chile pepper family.  Like Mace, pepper spray causes severe eye irritation resulting in tearing, intense pain, and temporary blindness.  Pepper spray is used by law enforcement and private individuals to subdue criminals or ward off an attack by an animal (like bears or dogs).

Pepper spray is a non-lethal self-defense and protection product, but can be fatal in extremely rare cases.  Oleoresin Capsicum is the most common form of pepper spray, although a few other variations have been developed and used in England and Europe.

Pepper spray differs from mace in that it is an inflammatory product, not an irritant.  Pepper spray causes the eyes to swell and the victim to immediately close them.  Pepper spray causes airway inflammation, resulting in fits of coughing.  These reactions, like the reactions to mace, cause the victim to become incapacitated for a time, allowing a victim to run away and/or for law enforcement personnel to overcome the attacker.  The effect of pepper sprays vary depending on the strength of the product, but last generally for between thirty and fourty five minutes.  Lesser effects and irritation can linger for several hours.

Like mace, legal requirements for private individuals carrying the spray vary between countries and individual states.  Sprays sold for self defense are available in a very wide array of easy to carry and clever disguises.  A pepper spray aerosol may look like a standard police pepper spray, a tube of lipstick (Lipstick Pepper Spray), or even a piece of jewelry (Pepper Spray Ring), keeping self-defense readily at hand without the knowledge of a potential attacker.

Sprays are sold in varying concentrations, the result being varying levels of effectiveness and longevity.  Mace and pepper sprays are also sold in formulations specifically designed for self-defense against an animal attack. Such as MACE® Dog Pepper Spray, or Bear Pepper Spray.

It is recommended for individuals interested in carrying a pepper spray or mace to have a short training in the proper use and effectiveness of the sprays.  Interested parties should check with local law enforcement regarding their right to carry and for more information on training and self defense.

A pepper spray or mace product could be a very good choice for any individual who wants to protect themselves from the rising occurrences of personal attacks and crime.  Self-defense sprays are similarly beneficial to exercisers and joggers who are concerned with loose dogs and wild animal attacks.