• Wildfire 1.4% Pepper Spray – Fogger
• 1 lb Pistol Grip Canister
• Hottest Pepper Spray on the Market!
• Can Disable an Attacker for up to 45 Minutes
• Effective up to 20 feet
• Up to 75 One-Second Bursts
• FREE LIFETIME REPLACEMENTS

THIS IS THE HOTTEST PEPPER SPRAY ON THE MARKET!

The WILDFIRE® PEPPER SPRAY is hot, hot, hot. The Major Capsaicinoids are the true heat measure, WildFire has the hottest on the market at 1.4% Major Capsaicinoids. In addition to causing an attacker pain, The WildFire 10%oleoresin capsicum formula swells the mucous membranes, which makes breathing difficult, and swells the veins in the eyes, causing the eyes to close. It’s made from 2,000,000 SHU’s of raw pepper and these effects can last up to45 minutes and cause no permanent damage. Has a UV identifying dye to help aid in the identification of an attacker.

This is a similar pepper spray to the spray used by Dog The Bounty Hunter!

The 1lb pistol grip model is great for crowd control, military, correction, security and law enforcement officers. Great for civilian use as well. Approximately 75 one second burst and a range of 20feet.

This Pepper Spray Is Covered Under Our FREE Lifetime Replacement Program! 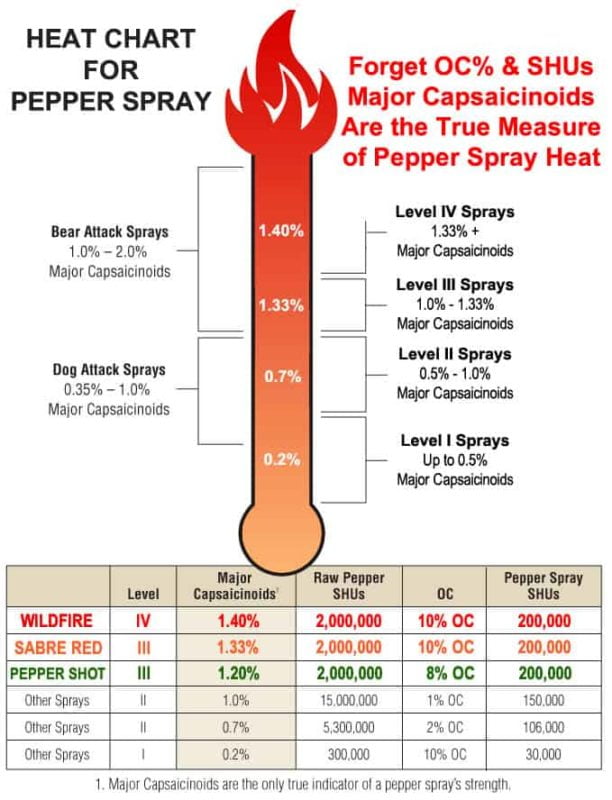